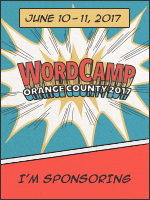 Once again 9seeds is honored to be one of the many awesome sponsors of WordCamp Orange County 2017 happening this weekend in Orange County, California.

At 9seeds we’ve all long been avid attendees, speakers, sponsors, and even organizers of  WordCamps around the world, from Las Vegas to Bangkok. WordCamp Orange County, however, has a very unique and special place in all our hearts and in particular Jon Brown’s WordPress history.

For 9seeds there are a lot of first and milestones that have occurred at this long-running cornerstone of the WordCamp Community.

9seeds sponsored the first ever WordCamp Orange County in 2010 and it was where Jon Brown first met John Hawkins and Todd Huish! WordCamp Orange County was huge for me personally as well.  As mentioned above it was the first camp I ever attended and that years organizers Brandon Dove and Jeff Zinn of Pixel Jar have been friends and mentors ever since. It was where I did my first talk on my journey from freelancer to agency owner while being a remote worker and digital nomad in 2014.

Oh, and Jon Brown is helping organize this year as well.